The Sound of Colliding Mountains

a new work by composer and Mitra Emma Chopourian for large ensemble and electronic tape
........'a colossal work'....a full immersion in sound.... 'a journey of wonder and revelation' 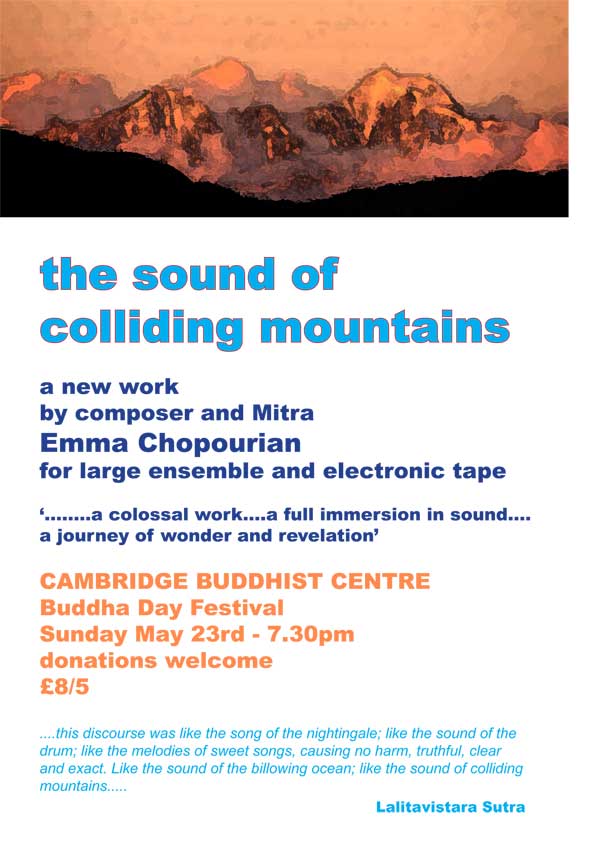 First Performance of 'The Sound Of Colliding Mountains', a five movement meditation based upon the Lalitavistara Sutra for large Ensemble and electronic sound by Cambridge Mitra and composer, Emma Chopourian.

Emma writes - I first heard the Lalitavistara Sutra years ago on Buddha Day at the LBC. The words and imagery were so beautiful and just opened my heart! I began meditating on the words quoted and soon an idea for a large scale work began to take shape. During these months I was also studying the book by Vessantara ' Meeting The Buddhas' and slowly other Bodhisattvas and archetypal Buddhas began to appear and a journey through these 5 meditations began to unfold. Quite central was the sound of electronic or 'other' sounds, giving atmospheres and the sense of mystery held in these words. The music is highly programmatic and begins in the depths of night and darkness in the forest and ends in the brilliant sunset light of the Himalayan Mountains. It reflects the deep foundation and fundamental importance of the spiritual journey. The words and inspiration of the Buddha. I wrote this work as an offering for Buddha Day

meditation two - the sound of the drum Dawn breaking - the traveller discovers a vaste open plane - there emerges the outline of a massive elephant. The realm of Akshobya.  In full sunlight the elephant begins to move - thus begins 3 dances; dance of the drum and Vajra, The Vajra and drum, Akshobya Mantra, drum and Vajra. Final immutable repetitions of the Akshobya Mantra.

meditation three - the melodies of sweet music The three Jewels. The Buddha - a slow chorale, ground bass and Shakyamuni Mantra. The Dharma - a nine fold melody for solo oboe with the ground bass accompaniment. The Sangha - the melody passed through the orchestra in a nine fold canon - the Dharma passing through the Sangha - the sangha sharing the Dharma

meditation five - the sound of colliding mountains Sunset, the Himalayan mountains. The sky turns from blue to azur blue and deep purple/indigo - the snow catches the light of the setting sun, vermillion - the huge deep red ball of the sun - Amitabha. Development - play of light on snow, winds moving, memory of how the mountains began - the crescendo of colliding mountains. Coda - final meditation and reflection. Dark blue sky, moon theme with return of Padmasambhava theme of courage, tender and rising into the night. 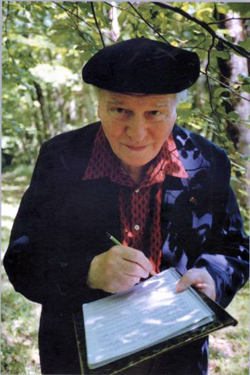 Messiaen notating birdsong in 1991
from Messiaen

by Peter Hill and Nigel Simeone.

Everyone welcome and bring your friends! Accomodation can be arranged

Book at the Cambridge Buddhist Centre

Cambridge Mitra, pianist and composer, Emma Chopourian will explore the visionary music of this 20th century giant: 'a comet who blazed so brightly across our musical universe throughout this last century'

A constellation of talks, concerts and films will be presented throughout December.

A series of evening and lunchtime activities will be presented. Talks and anecdotal reminiscenses will be given by Emma Chopourian; relating the profound influence and inspiration of Messiaen in her life to her 'practice' as a musician, mystic, and finally Buddhist practitioner. This will include an interview with internationally acclaimed organist Anne Page; discussing in particular, her recording of Messiaen's final organ work 'Livre du Saint Sacrement'.

From the Cambridge Sangha - A Birdsong talk, 'the Tristan Myth Explored' and Jayarava will re visit his essay on the 'Quatuor Pour La Fin Du Temps' as a pre-concert talk.

Several Film screenings of documentaries about Messiaen will be shown and a 'first screening' of the newly released recording 'performance' of the collosal Opera 'St. Francois d'Assise'